– A Pit Bull Poodle mix is a cross between a pit bull terrier and a poodle. They are very loyal dogs and will do anything for their owner.

– Pit Bulls are one of the most popular dog breeds in the world. They are known for being extremely protective and loving.

– If you want a dog that is both friendly and protective, then a Pit Bull Poodle mix may be just what you are looking for.

Ever wondered what would happen when you breed a strong Pitbull and intelligent Poodle? You get a Pitbull Poodle mix, affectionately known as the Pit Boodle!

Learn more about the Pit Boodle regarding his looks and behavior here!

What is a Pitbull Poodle Mix?

The Pitbull Poodle mix may sound unusual to others, but they are a fantastic dog breed to own! They are muscular and very active dog breeds that are loyal and easy to train.

Let’s take a look at where this breed’s parents come from, along with their history.

Poodles originated from Germany, bred as water retrievers. Over the years, Poodles have worked different jobs, such as service dogs, hunting dogs, even as circus performers, thanks to their intelligence. Today, you can find Poodles bred more to become lapdogs than water retrievers.

We can trace the Pitbull back to the 1800s in the United Kingdom. They were a cross between the Old English Bulldog and Terrier, who has the bulldog’s gaming skills and the terrier’s swiftness. Like the Old English Bulldog, who took part in bull baiting until the game was banned, Pit bulls participated in competitions for people’s entertainment.

The breed was then introduced in America, a working dog, helping with hunting and protecting livestock. Pit bulls became very popular in America to the point they were the country’s mascot during World Wars 1 and 2.

It’s tough to say what a Pitbull Poodle mix will look like because their parent breeds have different body types.

If the Pit Boodle looks more like their Pitbull parent, they will have a muscular build and boxier silhouette. They will appear proportional but have longer legs than medium-sized dogs.

But if the Pit Boodle looks more like their Poodle parent, they will have a leaner form with longer, thinner legs.

Generally, Pitbull Poodle mixes are medium-sized, though it will still depend on their parents’ sizes. Since we can find different kinds of Pitbulls and Poodles come in three sizes (Toy, Miniature, and Standard Poodles), the Pit Boodle’s size will vary significantly.

However, when you base it on the average adult height and weight ranges of the parent breeds, you can get a fair idea of how big Pit Boodles can get. You can expect them to grow between 18-24 inches tall, weighing about 40-70 pounds.

As for their coat, Pit Boodles would usually inherit the Poodle’s thick and curly coat. However, the curly hair won’t be as tight as the Poodle! That said, there are rare cases where the Poodle will inherit their parent Ptibull’s short and smooth coat.

While we can’t promise that a Pitbull Poodle mix will have a hypoallergenic coat, they most likely will have one, especially if he takes on more of the Poodle’s coat genes. Their coat can lessen the risk of an allergic reaction from a Pit Boodle’s owners.

Whichever coat they inherit, it can come in various colors. The Pitbull Poodle coat can be white, black, tan, gray, blue, or a brindle pattern!

Grooming requirements will depend on what type of coat they have. If your Pit Boodle got some of both parents’ coats, then you’ll need to brush their coat 2-3 times a week using high-quality pet brushes. They will also require baths every 4-6 weeks, using premium shampoo for his hair and skin type. The frequent grooming may be too much for some owners so that you can take your dog to a professional groomer monthly for full baths and clipping.

Besides the regular brushing and baths, you’ll need to brush your dog’s teeth, clip his nails, and clean the ears weekly. Doing so will help with his overall health and prevent any related health issues or injuries, such as ear canal infections, dental diseases, and the like.

Pit Boodles make excellent family dogs as they inherit the superb temperaments of their parent breeds. They are intelligent, athletic, active, and love to please their owner.

The Pitbull Poodle mix is also fantastic with children and other animals, provided that you socialize him properly as early as possible. They will be gentle and playful but still feel careful around children, thanks to their friendly nature. But of course, accidents still happen, and children can play rough, so supervise them at all times, and they will be excellent family companions.

Pitbull Poodle mixes are great companions, though they may get the Pitbull’s feistiness. That attitude may show if your Pit Boodle is shy when meeting someone new, leading to aggressive behavior. That said, you can prevent this from happening by socializing and training your Pit Boodle while he’s still a puppy.

Furthermore, your Pitbull Poodle mix might take on the slight clinginess a Poodle has. It can lead to separation anxiety, with the Pit Boodle feeling scared and agitated when left alone for long periods. Training can help lessen the symptoms of separation anxiety, though even then, it’s essential to give your Pitbull Poodle mix plenty of time and attention.

They are an active breed with a high energy level, like their parents, regarding exercise requirements. With their athletic nature, they require plenty of exercise!

It’s best to take them out for a walk or do other fun activities with 45 minutes of exercise daily. Other than physical activities, make sure you give them enough mental exercise through toys and games, too! Because they have plenty of energy, you’ll need to provide lots of time for both training and exercise to prevent your Boodle from feeling frustrated.

Pitbull Poodles will also need daily training sessions to behave well and socialize with others excellently. Begin with the necessary obedience and house training at an early age so they won’t exhibit aggressive or destructive behavior and habits in the long run. Also, be sure to use positive reinforcement as you train your puppy so he will not become stubborn and headstrong, trying to defend himself from you!

All dogs are different, like the Pitbull Poodle mix. Their sizes may affect their expected lifespans, with smaller dogs living longer than their larger counterparts. A Pitbull Poodle’s lifespan would also depend on how he was cared for, his overall health. On average, Pitbull Poodles have a lifespan of 9-15 years.

If you have any health concerns with your dog, make sure to have him checked by a veterinarian and update his vaccinations. Your dog will also need a healthy diet and moderate exercise, as mentioned above.

When talking about your Boodle’s food intake, the amount you feed your dog will depend on his age, weight, and any specific health conditions he has.

On average, an adult Boodle will ned 2-3 cups of premium dog food a day. We recommend dividing this into 2-3 meals with only a few treats between them. Never feed your dog human food, as this isn’t only unhealthy, but he’ll grow accustomed to the taste and ignore his premium dog food!

How Much is a Pitbull Poodle Mix?

While Poodle mixes are becoming more popular, it’s a bit difficult to find a Pitbull Poodle mix. It’s possible to adopt from rescue organizations or animal shelters with fees starting at $400. 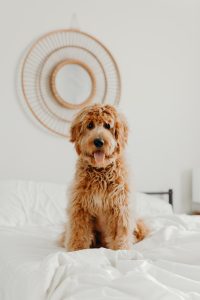 A Guide to the Mini Goldendoodle Mix 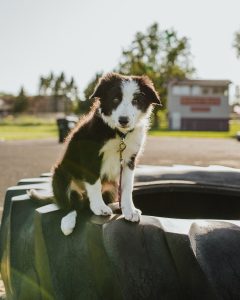